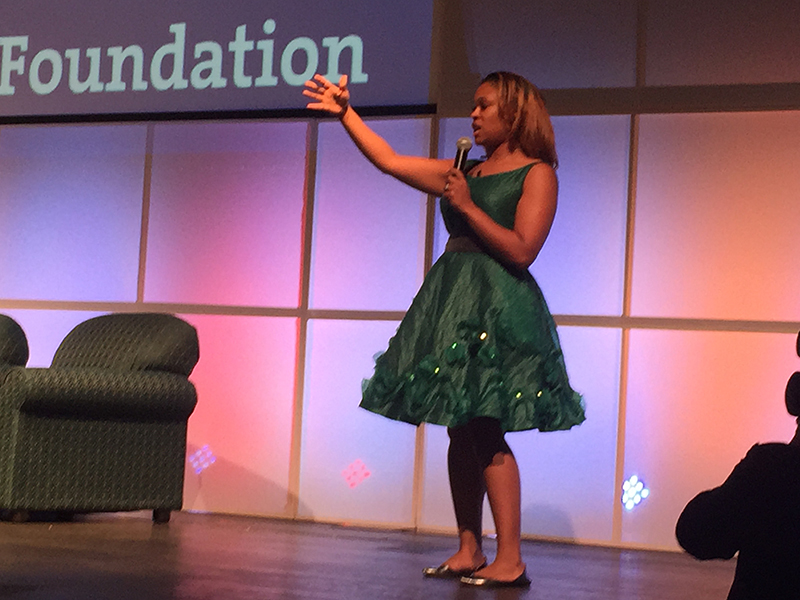 Pandwe Gibson of EcoTech Visions, a Miami incubator for companies with sustainable products, shows off a dress designed and made by young teens at DesignLab in North Miami. The dress lights up – technology is everywhere, she said, be creative. | Nancy Dahlberg Miami Herald

Although the event focused on celebrating tech innovators of color, it was prompted by the current state of diversity. Most of the marquee Silicon Valley companies — Facebook, Twitter, Google — have workforces with under 5 percent black technologists.

“Google’s mission is to be universally accessible and useful, but here’s the reality internally: what we have all heard, 2 percent black, 3 percent Hispanic. But here is another reality: $111 billion in economic activity changes hands on Google in 2013. Are you getting a piece of that pie?” asked Jewel Burks of Accelerate with Google.

Google has a couple of programs to help you do that, Burks said. Accelerate with Google Academy is a free 12-week bootcamp for helping business owners get people to your website. A new program for businesses that make something that Google could use, the Google Small Business Supplier Diversity Program, promises payment within 15 days among other benefits, she said.

As to the numbers in the workforce, she said, “There are great people working on that problem and it will be solved.”

<--Back to Press and Events Main Page

DesignLab featured in the September issue of VoyageMIA!

Our new non-profit venture DesignLab GIVE traveled to Cartagena Colombia!

Read all about DesignLab's latest ventures in Aventura Magazine

DesignLab participates in the Miami Mini Maker Faire in Wynwood

Aventura Magazine - DesignLab was features in the Local Color section of the Spetember issue! Check us out

Event Shoot - See What Was Happening At DesignLab in December

Princess Party at Macys - The Falls